The New Vandals   Arts and Entertainment

As Douglas Murray explains, why wait for protestors to trash museums? Curators are doing it themselves: 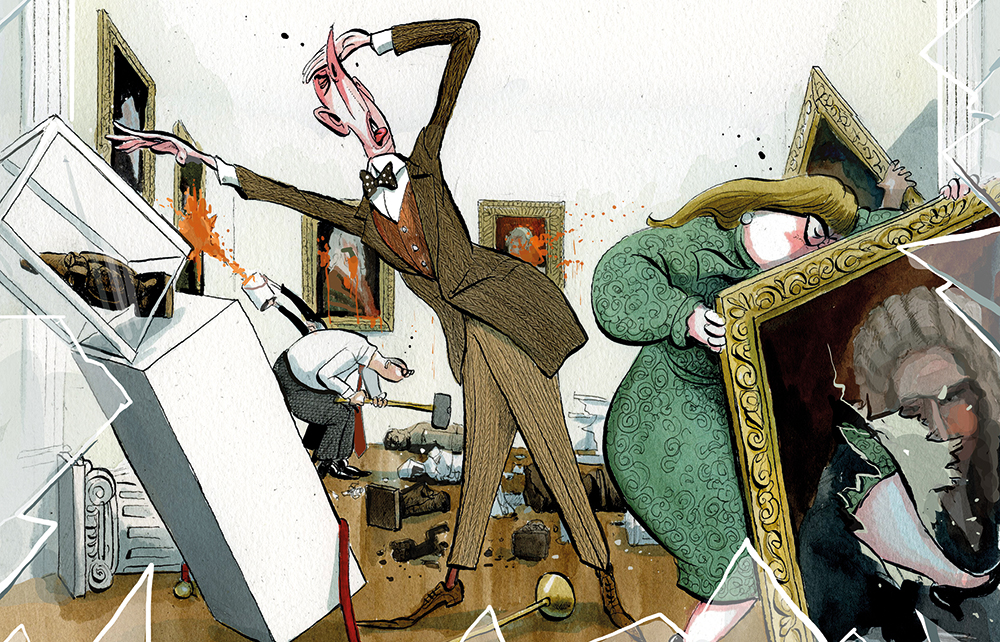 The new vandals: how museums turned on their own collections

This week I had the pleasure of going to the Pitt Rivers Museum in Oxford. I say 'the pleasure' but visiting the Pitt Rivers was never precisely a pleasure. Twenty years ago, as an undergraduate, the collection was something of a rite of initiation. The place, filled with strange and wondrous objects, was famed above all [...]

Read more from The Spectator
This week I had the pleasure of going to the Pitt Rivers Museum in Oxford. I say ‘the pleasure’ but visiting the Pitt Rivers was never precisely a pleasure. Twenty years ago, as an undergraduate, the collection was something of a rite of initiation. The place, filled with strange and wondrous objects, was famed above all for its gruesome pickled heads: artefacts reminiscent of the ‘coconut’ that the one-eyed Brigadier Ritchie-Hook collects in Evelyn Waugh’s Sword of Honour.

What did we think of them in those now distant days? That they were part of another age, naturally – a collection of artefacts from another time, representing another era, with its interests and curiosities.

Today the collection is still there, although the heads are not. But after a recent refurb the place has transformed into a shrine to a different time: our own. For the museum is now dominated by signs telling you that the collection is a terrible thing. Huge billboards tell the visitor that the museum is ‘a footprint of colonialism’, is ‘not a neutral space’ and yet ‘can be an instrument of resistance’. Throughout the collection we are repeatedly hectored about ‘imperialism and colonialism’, naturally, but also colonial attitudes towards ‘race, class, culture, gender and sexuality’. The signs by the exhibits repeatedly parrot the mantras of our day about ‘hierarchies’ and ‘Eurocentric ideas’.

You might imagine the Pitt Rivers is something of an anomaly. But it is not. In today’s Britain it is to be expected that our cultural institutions are run by people who hate the collection in their care as well as our culture and our history more broadly. Lest we forget, all this has happened under a Conservative government.

Take Tate Britain, perched gloriously on the banks of the Thames. It is the home of one of the great collections of these islands. Yet today the trustees of the Tate do not seem to think that they should simply conserve the collection. They do not even think that their job is to explain it. They appear to believe their task is to condemn it – to stand as judge, juror and executioner over it One might hope that the exhibition devoted to Hogarth, Britain's greatest ever cartoonist (indeed the founder of the lampooning, cartooning

Visiting public art galleries has become a dangerous undertaking — at least if one wishes not to be accosted by ludicrously woke signage and unnecessary trigger warnings. In the past, one might have, justifiably, seen warnings before entering a room exhibiting, say, the garish and pornographic sculptures and photos of Jeff Koons going hard at it with Hungarian-Italian “actress” and part-time politician Ilona Staller, aka Cicciolina. Today, such warnings are found outside galleries exhibiting not such ephemera but the greatest works in the Western canon.

Last autumn’s Titian show at the Isabella Stewart Gardner Museum in Boston warned visitors before entering that “Titian: Women, Myth and Power explores themes of sexual assault and violence.” The woke infestation of great galleries began in the United States, but it is a disease that has been caught, and caught badly, by the art museums in London. Alas, no “world-beating” vaccine yet lies at hand.

Tate Britain, the UK’s premier gallery of British art, a short walk from where I live in central London, is very stricken. It has closed its proper restaurant, once known for its excellent and well-priced wine list, due to the apparent offensiveness of the decor: “Expedition in Pursuit of Rare Meats,” a mural encompassing all four walls by the decorative painter Rex Whistler, after whom the restaurant is named. When it first opened in 1927 it was described as “the most amusing room in Britain.” During Tate Britain’s £45 million rejuvenation in 2013, the mural was extensively restored — an action which the museum made much of in its report for that year.

The money spent on the restoration was wasted. Those needing a sit-down lunch and a decent glass of wine after a busy morning viewing Tate’s unsurpassed collection of Constables, Gainsboroughs, Turners and Pre-Raphaelites are now confronted by a sign saying “The Rex Whistler Restaurant will remain closed until further notice.”

The reason? In one corner of the mural — a clearly mythical landscape of hunters, nymphs and satyrs — is a black slave boy with a chain round his neck. The Tate’s ethics committee has pronounced that “the imagery of the work is offensive.” Apparently the offense is made much more egregious due to the fact that plump, prosperous, middle-aged white people might be eating in front of it. Clearly, a mere trigger warning will not suffice. While we await a final decision on its fate from the museum, the restaurant remains closed and there seems little prospect of it ever reopening. 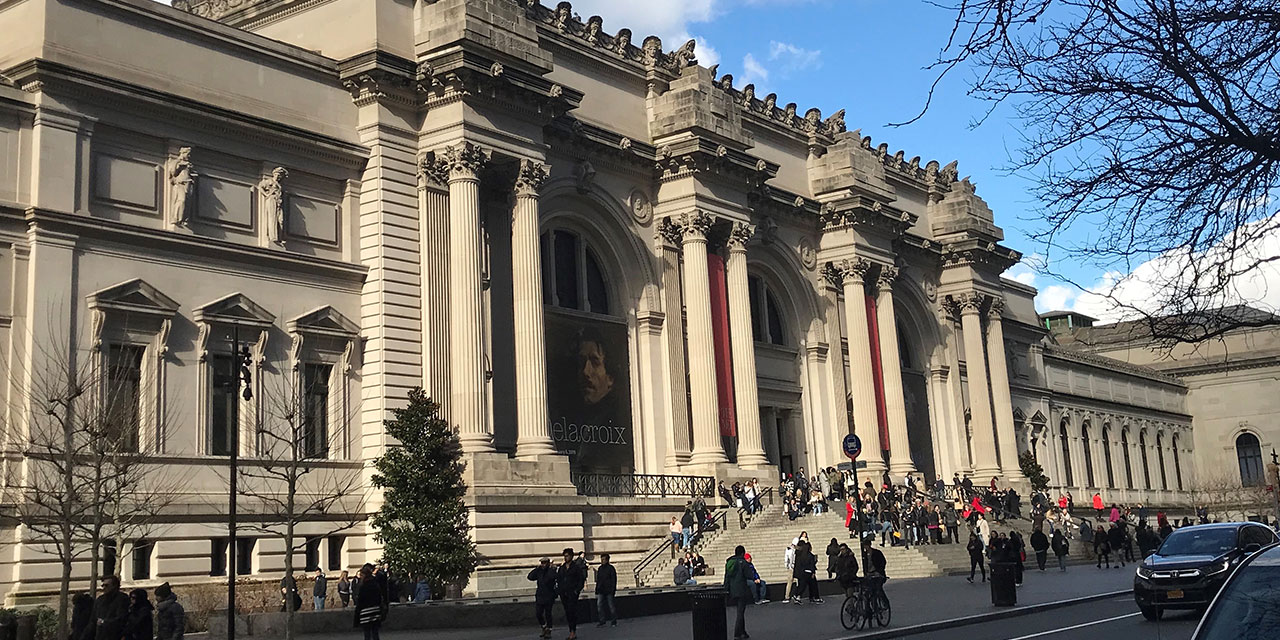 Distort the Present, Rewrite the Past | City Journal

Following the lead of other major cultural institutions, the Metropolitan Museum of Art redefines its purpose as overcoming the racism of Western civilization.

Read more from City Journal
Like the Art Institute of Chicago, the Metropolitan Museum of Art has redefined itself as an antiracist “agent of change.” In July 2020, its director Max Hollein and CEO Daniel Weiss announced that the museum will henceforth aim to overcome the racism still perpetrated by our “government, policies, systems, and institutions.”

What such a political mandate means for an art museum may seem puzzling, but two exhibits currently running at the Met provide an answer. They suggest that the museum will now value racial consciousness-raising over scholarship and historical accuracy. Double standards will govern how the museum analyzes Western and Third World art: only the former will be subject to the demystification treatment, while the latter will be accorded infinite curatorial respect. The Met will lay bare European art’s alleged complicity in the West’s legacy of oppression, while Third World violence and inequality will be chastely kept off stage.

Most of the last part of this wonderful essay by Heather Mac Donald is a takedown of the Met's ludicrous exhibition called “The African Origin of Civilization”.

Some of us are well versed in the writings of the pseudo-historian Cheikh Anta Diop on whose 'history' this exhibition is apparently based.

Funny, but at the same time sad.  Another indication of the low-level of education we see just about everywhere now. 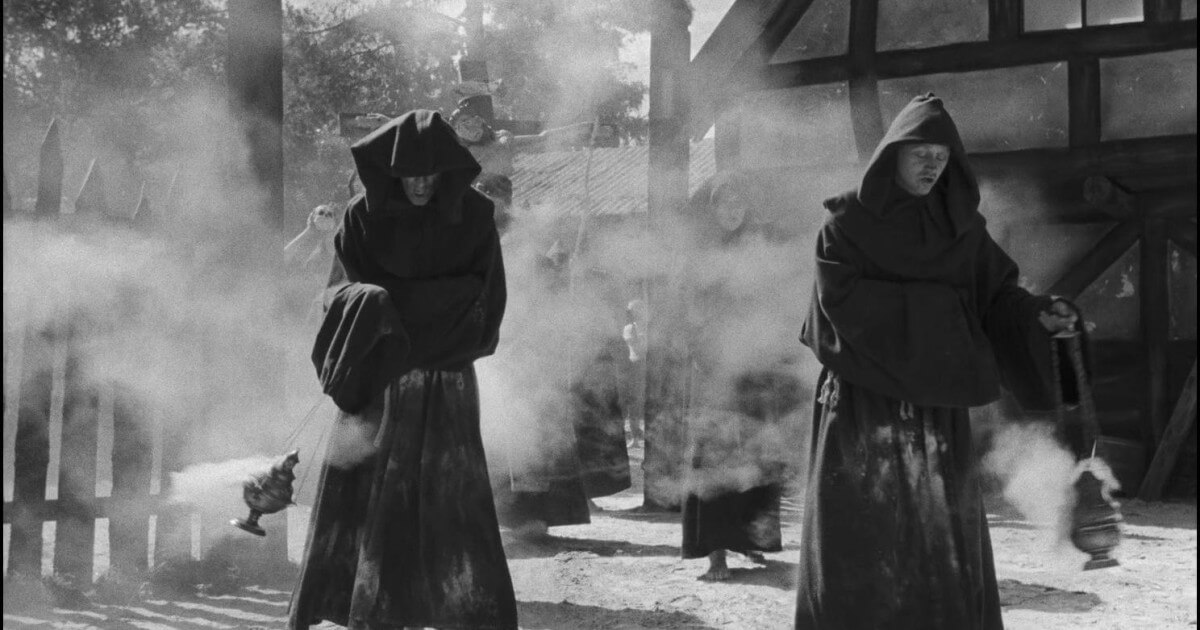 On the loss of purpose in cultural institutions.

Read more from The New Criterion

... As the commentator Rod Dreher noted in a stinging essay called “Hateful Whitey Binds Her Feet” at The American Conservative, Princeton’s ballet class shows “how the American elites are being indoctrinated to think about art, race, their country, and themselves. This is not,” Dreher adds, a passing phase. These people will move into the directorship of institutions that will have a major effect on life in this country. They hate ballet. They hate art. They hate beauty. They hate their predecessors in the dance tradition. They hate freedom of thought. They hate white people (including . . . themselves). They hate America, and they hate the West. Above all, they hate.

Strange to say, there is a bit of good, or at least promising, news in all this. The friend who sent us the repellent letter from the Morgan has been a generous donor to that institution for years. She was, in fact, planning to visit the museum recently when she was in New York. Then she received Colin Bailey’s communication. She canceled her visit and she plans to stop giving to the museum. We suspect that many people feel similarly. Why should they go to a museum or concert hall or support a university only to be hectored by politically correct harridans? If they want lectures on “social justice,” they can read The New York Times or tune into cnn. The tide, we suspect, may be turning against this round-the-clock, racially infused wokeness. The ubiquity of the phenomenon has led to widespread nausea. In the academy and in the world of culture, the disciples of diversity have overplayed their hand, as such fanatics are wont to do. A reaction has been forming for some time, and we expect it to repudiate this cloying, moralistic tyranny in a manner at once subtle and definitive: by going elsewhere.

A reaction has been forming for some time, and we expect it to repudiate this cloying, moralistic tyranny in a manner at once subtle and definitive: by going elsewhere.

"Let my enemies devour each other".

Eccentric and extrovert in the extreme - Salvador Dali always had something to say, and people were happy to listen.

We are living into an uncommonly class and retarded generation!!

Frankly, I'm convinced that one of the major reasons the woke are so anxious to remove 'colonialist' and 'white supremacist' art from galleries is that leaving it there makes the African and Native American art in their collections look shabby.

I suppose the ultimate plan is to sell these 'racist' works of art to make up the shortfalls created by declining interest from the public in what these institutions are promoting.

In mid town Montreal, there was a Cross on the top of a Hill, they took it down and replaced it with an electric chair created by Jean Paul Riopelle....

Christians had no say when they spoke up... beats me, I'm not a Christian but I find Riopelle's art appalling!!