Sorting out the Press

Whatever the Press and the mainstream Media does not bring out!

Sorting out the Press

America was a very different country

Coulter Doubles Down on Trump Criticism

Life is a wild journey

AOC on Trump's willingness to accept political 'dirt' on rivals: 'The pressure to impeach grows'

Days after President Trump asserted he would take damaging information on his political rivals from a foreign power, New York Rep. Alexandria Ocasio-Cortez said "the pressure to impeach grows.”

“I think every day that passes, the pressure to impeach grows," said Ocasio-Cortez Sunday in an interview on ABC News "This Week." "I think that it’s justifiable, I think the evidence continues to come in and I believe that with the president now saying that he is willing to break the law to win reelection, that transcends partisanship, it transcends party lines, and this is now about the rule of law in the United States of America."

The freshman Democrat called for an impeachment inquiry "to look at what’s going on," pointing to the Mueller report that covered "10 counts of obstruction of justice, four with rock-solid evidence,” Ocasio-Cortez said.

Obama received over $20 million from foreign entities during his re-election campaign.

AOC is a communist puppet

It's mind boggling that the media brings her up on daily basis, and she think is that she is an important asset to the rule. 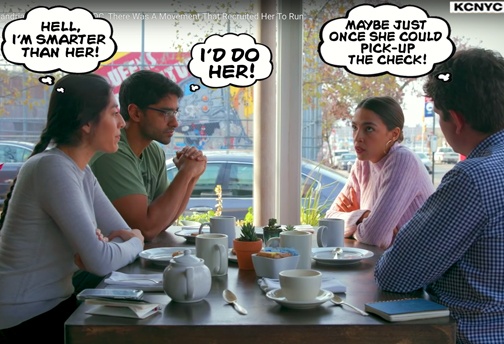 It sure speaks volumes!

You got five thumbs up on this pix

It sounds like a crazy conspiracy theory, acknowledges actor, writer and political commentator, Christopher Patrick Kohls. But the first-hand evidence is there for anyone to see, he contends in a youtube video produced under his Mr. Reagan moniker.

AOC gets OWNED by ICE Director